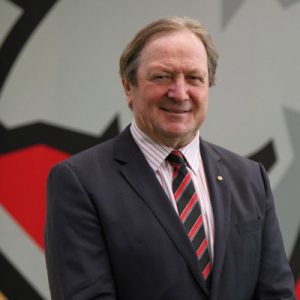 Kevin Sheedy is a well-respected AFL Legend.  Having coached Essendon Football Club to 4 Premierships, Kevin is now the inaugural coach of Greater Western Sydney. A remarkable coach and gifted speaker, Kevin is a great addition to any conference agenda.

Kevin Sheedy has been a success as a player and coach and is without peer when it comes to engaging new communities in the game. As an ambassador to the AFL, he was heavily involved in developing the Greater Western Sydney side. He was a driving force in the development of AFL Sportsready, a program which has provided more than 4000 jobs for young people.

In addition, he drove events including the Anzac Day match between Essendon and Collingwood, the Dreamtime at the ‘G match to celebrate indigenous players and Essendon’s strong presence in the Sydney market.

Kevin is known as much for his off-field work as he is for his premierships. In 1998, he broke the record for coaching more professional AFL games than anyone else in history. With a total of 886 games under his belt, he holds the AFL record for the most games combined as a player and coach.

In 1973 Kevin Sheedy was appointed assistant skills coach and club development officer. While in this role he conducted football clinics at schools, junior and country football clubs, and shopping centres. He also introduced a Melbourne suburban football competition for children.

Indeed, Kevin Sheedy has been a catalyst for many changes in AFL: respect for interstate football during the 1980’s, an expanded interchange bench at the state and club level, a new level of versatility among players, the growing influence and confidence of Aboriginal players, clever manipulation of the draft and apprenticeships in football. “Sheeds” incredible run as Essendon coach came to a close at the end of the 2007 AFL Premiership season. He continued on in an ambassadorial position with the AFL and took up the position as coach of the new Greater Western Sydney team in late 2009.

Kevin has long been an ambassador for the game throughout Australia. He has done a great deal of work with Aboriginal communities in the northern parts of Australia, encouraging young Aboriginal people to take up the game, and being a vocal supporter of anti-racial vilification laws in the game. He also encouraged foreign players to train with his side including a former American footballer, a skillfully athletic Ethiopian immigrant and more recently two gallant Japanese try-outs.

Kevin Sheedy has racked up numerous appearances on television and radio, including appearing on FOX FM’s Friday morning football tipping with Tracy Bartram and Matt Tilley in 2003 and 2004. He writes columns for the Herald Sun and is a spokesman for Aquamax Australian water heating systems.

Testimonials
Excellent, a perfect fit. Kevin slotted into the event like he was one of our own staff. He stayed for the duration of the event and virtually spoke to everyone in the room. Kevin posed for photos and signed autographs, and his address was not only highly entertaining but relevant to our objectives on the night. He is a true legend.

Insurance Group Australia
Kevin was very highly rated by the audience, with 85% of participants saying that he exceeded their expectations of the session. He was engaging and made the content relevant to the audience. Audience comments include: “Terrific way to end the conference with such an extraordinary bloke, who believed in the simple philosophy of one good idea, seeing beyond your backyard, being grounded and knowing who you are, reducing the bullshit and enjoying your job and life. Thanks very much” and “Thought this was the best part of the conference – his brief was relevant to our jobs and was thought provoking – great choice of speaker”

NSW Secondary Deputy Principal’s Association
He was very well received and rated well. He drew on his experience to give the audience a broader insight into building and developing talented teams 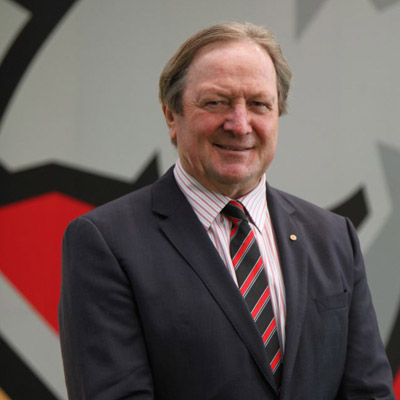