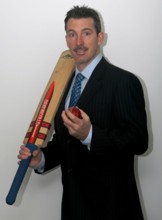 Damien Fleming ….is a former Australian cricketer who played in 20 Tests and 88 ODI’s from 1994 to 2001.
He has been recognised as one of Australia’s premier pace bowlers, an expert in the art of swing bowling.
Damien Fleming’s 20 Tests between 1994-95 and 2000-01 returned 75 wickets at an average of 25.89 with best figures of 5/30. He is one of only three men (along with Maurice Allom and Peter Petherick) to have taken a hat-trick on Test debut. Fleming’s Test match record is impressive, in the 1999-00 season in six Tests between Pakistan and India he took 31 wickets.
Fleming’s ODI record is equally impressive, representing his country 88 times including two World Cup finals and 134 wickets at an average of 25.38. He was seen by many as a one day specialist, especially in the latter overs when his fine economy rate kept runs down.
Injury problems shortened his career, with the side on bowling action which generated his swing also put more strain on his body.
Following his retirement in 2003 he was appointed head coach at the Australian Cricket Academy.

Today, Damien Fleming is a popular figure on the public speaking circuit, and regular questions are asked of that dropped catch by Shane Warne which denied him his second hat-trick. He has previously been a presenter on Melbourne radio station SEN 1116, but now commentates the cricket on ABC radio and FOX Sports in the summer. Damien was known as the wizzard because of his brilliant bowling of swing.

More recently Flem joined 3AW where he applies his cricket expertise and all-round sports presentation skills across a variety of programs. Throughout the cricket season Flem continues to commentate on the T20 Big Bash for Network TEN and makes regular appearances on Inside Cricket and the Back Page for Fox Sports.

To prove there are no boundaries to Flem’s ability he became a best-selling author after releasing his first book ‘Bowlology’ in 2013 which is an entertaining collection of stories from Flem’s life in cricket. 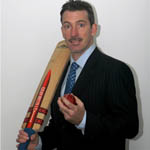