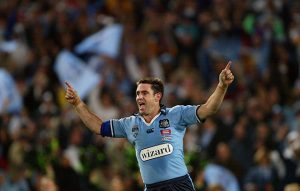 Brad Fittler – NRL, Sport, Teamwork
Fittler’s first grade career started in 1989 at the Penrith Panthers while he was still in high school. He played in Penrith’s 1990 Grand Final loss, then in the Premiership winning side of 1991. In 1996, he joined the Sydney Roosters where he played nine seasons, captaining them to the 2002 Grand Final victory. Fittler is second behind Terry Lamb as the most experienced first grader, having played 336 games, scoring 122 tries.

…represented the Australian Schoolboys from McCarthy Catholic College in 1988 and 1989. He was selected for Kangaroo Tours in 1990, 1994 and 2001 and played in the World Cups of 1992, 1995 and 2000.
He captained Australia in 20 Tests, winning 17 and losing 3, and in a further 5 victories in the 2000 World Cup. He also captained NSW in 14 State of Origin matches, winning 8 and losing 6. In club competition, he captained the Roosters to their first grand final appearance in twenty seasons in 2000, a Premiership in 2002 and successive grand final appearances in 2003 and 2004, before retiring at the end of 2004.
Two years after Fittler announced his retirement from representative football, NSW coach Phil Gould brought him back to State of Origin for the second and third game. Both he and Gould were farewelled in the last game at Telstra Stadium after he scored the winning try that sealed the NSW victory.
Fittler remains the youngest NSW State of Origin player (18 years 114 days) and was once the youngest Kangaroo representative (18 years 247 days) until Israel Folau made his debut in late 2007. Brad Fittler played more total matches (409 combining club and representative games) than any other player.
Brad Fittler is now seen on Channel 9’s Rugby League coverage, and is one of our most in demand NRL speakers who’s stories from his playing days are hilarious and give a great insight into the game. 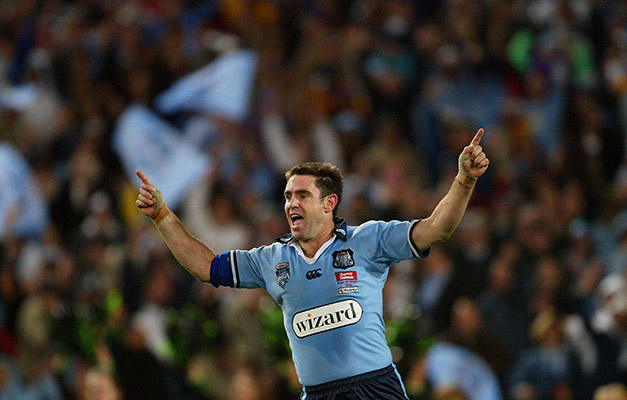