WAYNE JONES By Greg Phillips, editor Australian Musician magazine.
You may have heard the phrase musician’s musician! You know the type … they’re such established players in the scene that everyone wants them on their sessions. Australian bass player, songwriter,arranger, and performer Wayne Jones fits the term perfectly. Wayne has played with so many of Australia’s leading artists over such a long period of time. However, It took until 2006 for Wayne to show his true colours with the release of his first solo album ‘Forgotten Melody’. Luckily for music lovers we only had to wait until 2009 for the follow up ‘Saturday Street’, further cementing Jones’ reputation as a world-class instrumentalist and tunesmith. 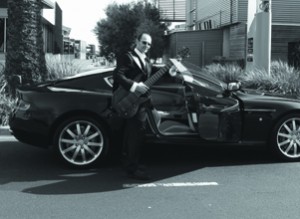 Since Wayne Jones presented us with Saturday Street, he sold his much loved vintage car, packed his bags and traversed the world spreading the word on his music, resulting in club gigs in Tokyo, performances on the foreshore in Florida, chart topping tracks in the Canary Islands and has achieved airplay from radio stations at all points of the global compass.

…unleashes his finest work yet, the six track recording ‘Closed For The Holidays’

Wayne Jones Closed for the Holidays

The music is yet another classy collection of high-quality smooth/contemporary jazz grooves featuring Wayne Jones’ signature sound. Closed For The Holidays includes an incredible array of international musicians supporting Wayne on the recording including sought-after US trumpet player Rick Braun, Mike MacArthur on sax, Fallon J Williams III on drums and percussion, Dave Carter (Keys), Ron Peers (guitar), and Paulo Vargas (percussion). While Wayne Jones has accumulated many miles of travel with his music career, his world journey is far from over, in fact it’s only just beginning. Yet with Closed For The Holidays you can’t help but feel he’s arrived anyway!The future looks bright with stand-alone gigs, festivals and promotional activity planned in territories where Wayne Jones has already established a name for himself.