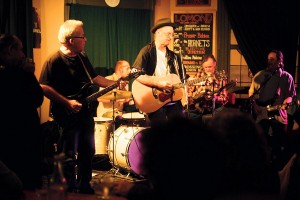 ….can play as a duo trio, quartet etc etc depending on the gig and can bring in guest musicians such as Ross Hannaford, Paul Williamson and even Vika Bull depending on the show and of course the budget.

The Hornets Blues Band have played around Melbourne for many years, produced 5 critically acclaimed CDs (Everybody’s Guilty and Can’t Live With You were named in the top 10 releases for their respective years by The Age and Herald Sun) and we have played many festivals, Port Fairy, Thredbo, Apollo Bay, Riverboats Festival, Echuca Blues Narooma, Byron Bay etc and special events throughout the country.

The Hornets – Rainy Night in Goergia

The Hornets – All Blues Singers are Liars

Dead Café
Blues Singers
Certain Age
Melbourne
All Men are Bastards
Early in the Morning
Sitting on top of the World
Rainy Night in Georgia
Serve Somebody
Honey I was Wrong
READ MORE...READ LESS