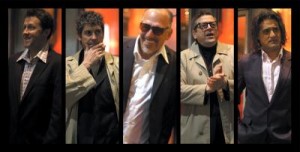 Any examination of The Black Sorrows inevitably comes down to one person. Joe Camilleri (singer, songwriter, saxophonist, producer and the brains behind The Black Sorrows) is one of the most genuinely talented figures in Australian music. In 2014, with 45 albums under his belt, Joe Camilleri will celebrate 50 years in the music business and is showing no signs of slowing down. In the award winning documentary of his life in music, Joe Camilleri: Australia’s Maltese Falcon, Jane Clifton described Joe as “indefatigable”. It is his seemingly tireless drive to continually perform and record quality music that has rewarded him legendary status and well-deserved longevity in the music industry.
Writer of milestone Australian songs such as So Young, Hit And Run, Shape I’m In, Hold On To Me, Harley and Rose, Chained To The Wheel , Never Let Me Go and the Chosen Ones, Camilleri has dedicated his life to making music. Leader of two of Australia’s most successful bands, Jo Jo Zep and The Falcons and The Black Sorrows, Joe’s music has become part of Australian music culture. Joe was inducted along with other members of the Falcons, into the Australian Recording Industry Association (ARIA) Hall of Fame in 2007.
Over the years other greats have admired Camilleri’s songwriting. Elvis Costello and John Denver are just two who have recorded cover versions of Joe?s music. The Black Sorrows continue to be one of Australia?s most successful touring bands and 2014 is shaping up to be a very busy year. Album number 17 from the Sorrows, Certified Blue, is a superbly produced and packaged album that Joe has chosen to release as a CD and as a limited edition, coloured 12” vinyl LP. Certified Blue contains some of the best songs Joe and his long-term writing partner Nick Smith, have ever written. The songs draw upon the diverse palette of Joe Camilleri’s musical tastes and influences – blues, jazz, country, roots, r’n’b, and Americana. Certified Blue was released on Friday 4th April 2014.
After two powerful performances at the 25th Byron Bluesfest April 2014, the band headed to Norway to perform at the legendary Rockefellar Music Hall and then Nidaros Blues Festival by special invitation. Scandinavia embraced Joe and The Black Sorrows in the late eighties early nineties where the albums Hold On To Me and Harley and Rose were top 5 hits. Touring Europe is now permanently on the agenda for The Sorrows, they will return in 2015 to perform at summer festivals.
Membership in The Black Sorrows has always been loose and fluid with Camilleri being the only constant. The Black Sorrows ‘elastic line-up’ and has been home to over 40 talented Australian musicians at different times and acted as a launch pad for the careers of some of Australia’s most successful musicians. In keeping with Joe’s penchant for continually moving forward, the newest version of The Black Sorrows is a formidable one – Claude Carranza (guitar/vocals), Mark Gray (bass/vocals), John McCall (keyboards/vocals) and Angus Burchall (drums).
In the mid 80s following the success of Jo Jo Zep and The Falcons, Joe Camilleri gathered together a group of musician friends and dubbed them The Black Sorrows.

The Black Sorrows began playing for the fun of it, recording independent albums and selling them at venues. When radio picked up the classic track, Mystified, The Black Sorrows really took flight. The band signed a worldwide deal with CBC/Sony and proceeded to release some of Australia’s most successful albums including the multi-platinum sellers Hold On To Me, Harley and Rose and The Chosen Ones.
Since 1984, The Black Sorrows have toured Australia more times than anyone can remember, played sell out shows across Europe, won the ARIA for Best Band‚ and sold more than two million albums worldwide. Joe Camilleri has shown fans and critics alike that he is a performer with an undeniable energy and love of it all.