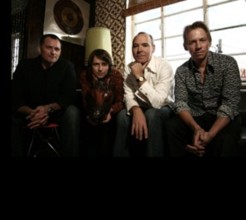 September, 2008 – Fans of solid rockers and ARIA Award winners The Badloves will be thrilled at the announcement that the band is once again hitting the road with the full, original line-up that saw them become a household name in the mid-nineties after numerous successful national and European tours. Formed by frontman Michael Spiby in Melbourne during January 1990, The Badloves boasted a tight live act from the get-go. Spiby and his band mates, Jak Housden and Stephen O’Prey, produced a sound, which some critics described as “neo-hippy” and “retro”. In 1993 came Tony Featherstone, whose Hammond organ provided an essential component to what would become the trademark Badloves sound and it wasn’t long before their own brand of laid back 1970s style blues, Memphis soul and New Orleans R&B material started making waves amongst industry taste makers. In 1994, their debut album “Get On Board” made the Australian Top 5 and the band was nominated for three ARIA Awards, winning Best New Band and Best Debut Album in 1994. John Favaro replaced O’Prey on bass at about the same time. After extensive touring in Australia and Europe, playing to packed houses, The Badloves released their second album in September 1995, “Holy Roadside” (mixed in the US by Jack Joseph Puig) to critical acclaim, establishing them as one of this country’s premier acts. A follow up live album “Everybody Everywhere”, was recorded at the Continental Café in Melbourne in 1996, which gave fans an opportunity to re-live the band’s inspired live performances. In 1997 break from a hectic touring and recording schedule was instigated, and The Badloves performed what were thought to be their last shows – each member following their respective personal pursuits. After appearing at the MCG for the Mushroom 25th Anniversary Concert in 1999, it was obvious the band still had a lot to give, but just twelve months later, The Badloves seemingly vanished from the scene. After much speculation about what actually happened to The Badloves, the band have defiantly announced a new string of dates, and have confirmed rumours that a new album will be released later this year. This announcement has been received with great excitement amongst music lovers Australia wide, as The Badloves are remembered as one of this nation’s finest and most influential rock bands. They are already a part of Australian rock history, and they are about to write a whole new chapter