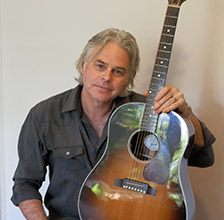 Steve Hoy first came to national attention in 1985 with the release of the Joe Camilleri produced Anticipation. The album, released on Camilleri’s Spirit label, contained rootsy versions of nine Steve Hoy originals backed by Ross Hannaford, Wayne Duncan and Gary Young;
Daddy Cool in all but name.
A single, Your Heart On My Sleeve picked up airplay in Canberra and Melbourne while the Steve Hoy album received positive reviews.

The release of the mini-album Possession, recorded with The Hoy Boys – Steve Hoy, Mark Greig, Paul Norton and Grant Hampson in 1987, followed a relocation to Melbourne where consistent live work headlining, or supporting acts such as The Black Sorrows, Paul Kelly, Stephen Cummings and even John Farnham had lifted Steve Hoy’s profile. A single Where I Come From, a song inspired by Steve Hoy’s hometown of Newcastle, and an accompanying film clip picked up sufficient radio and TV interest to bring Steve Hoy to the attention of music publishers Rondor Music and Jerry Moss; the M in A&M records.

The radio success of the Mark Moffatt produced single Raindance led to the recording of Life Next Door, a critically acclaimed release that ended up in most newspaper ‘best of year‘ round ups for 1990. A tour with Melissa Etheridge that year brought Hoy to a wider audience while another single Break Up Fall Out brought more airplay and was later recorded by Cameron Daddo. A new version of Where I Come From was released being picked up by Triple J. However, the link with A&M was short lived, Hoy finding himself without a label at the same time the critics were praising his album!

Continued live work, principally during an eighteen-month residency at St Kilda’s Esplanade Hotel, saw Hoy develop a new, loyal audience. Hoy toured with The Black Sorrows, Warren Zevon and Tori Amos at this time, with Zevon offering to produce a record if the opportunity arose.

Self Defence, recorded with Hoy’s band The Lost Millions – Scotty Martin, Garrett Costigan, Bruce Haymes and Robbie Geappen – was released on Siren Records to glowing reviews in 1994, then repackaged in 1995 for Fable/EMI. Also at this time he helped Lisa Miller record her ep Do That For You, depped for Broderick Smith, while the singer met the Prime Minister (!) and worked alongside Matt Walker and Dave Steel for some shows with Natalie Carne. Hoy toured as Dwight Yoakam’s special guest in early 1996 accompanied by multi-instrumentalist Kerryn Tolhurst. A couple of months later Hoy was the opening act on Emmylou Harris’ ‘Wrecking Ball’ tour. In October that year Hoy played as opening act for Clannad in Melbourne and gave a farewell show in Melbourne with guests Ross Hannaford, Spencer P Jones, Chris Stockley, Kerryn Tolhurst and Ross Wilson accompanied by The Last Millions: Randy Bulpin, Garrett Costigan, Bruce Haymes, Scotty Martin and Tim Millikin.

After re-locating to Sydney, Hoy set about acclimatising to his new home, sitting in with friends and performing solo acoustic spots at various inner city venues. In May 1997 he toured with Sheryl Crow. At the behest of Don Walker he co-wrote with Nathan Cavaleri and also tutored for The Bondi Wave, working with Lindy Morrison in a brief collaboration. The following year he began working with a floating line-up of players including drummer Joel Sutton, bassists Mark Bradridge, Hal Tupea, John Power and Michael Vidale and guitarists Matt Handley, Phil Colson and Mark Punch. While visiting Melbourne he played guitar on Cyndi Boste’s debut Home Truths. In 1999 Hoy played guitar for Kerri Simpson in her opening spots with Keb Mo and Dr John in Sydney.

Late in 2000 Hoy became part of Club Acoustica’s tribute nights at The Basement. Jackie Orszaczky invited Hoy to contribute to his Dr John Shows in 2002. Also John Power invited Hoy to sing and play guitar in a revamped line-up of The Hippos, while Hoy settled on a band with drummer Lloyd G, guitarist Nick Meredith and bassist Wayne Kellett.