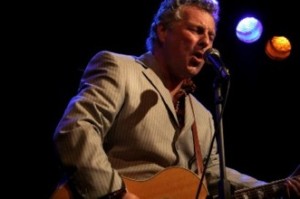 Ross Wilson is probably the only person in Australian rock music who can’t make a comeback simply because he’s never been away.
In a career that spans over 40 years Ross remains one of this country’s most respected artists. From Daddy Cool to Mondo Rock, as a solo artist, or as songwriter of A-grade classics such as Eagle Rock, Cool World and A Touch of Paradise, or producer of the legendary Skyhooks, Jo Jo Zep, The Johnnys, & more recently The Screaming Jets, Ross’s involvement with success has continued unabated.

Ross Wilson fronted Daddy Cool & exploded out of the 70s playing rootsy 50s sounds, then formed Mondo Rock who surfed the contemporary scene with chart topping singles & albums from the mid 70s to the late 80s.
As a solo performer and major songwriter he continued to achieve success & make his mark during the 90s & beyond with his songs being recorded by artists as diverse as Jimmy Barnes, John Farnham, DEF-FX, Custard, Jennifer Rush (EU), Troy Cassar-Daley, Leslie Avril, Hey Gringo, You Am I, Uncle Bill, Keke (Spain), Renee Geyer, Christine Anu, Duane Jarvis (US), Elkie Brooks (UK), Ann Kirkpatrick & Lee Kernaghan, Sovereign, Pleasantville, Beccy Cole, Sonic Jihad, and The Wiggles! On trips to Europe & the USA he collaborated with O/S writers & concluded the millenium as a special guest performer on John Farnham’s “I Can’t Believe I’m 50” tour & live CD/DVD.

2001 saw Ross Wilson back on the frontline as the result of a decision to return to regular live performing & recording. A new solo album GoBONGO GoWild! was released in April 2001 displaying the vital influence that blues-based music, such as early R&B and jazz, continues to have on his performance & songwriting styles. Rave reviews for GoBONGO GoWild! led to an alliance with Shock Records & the November 2001 release of ‘Now Listen! The Best of Ross Wilson’, a 30 track, 2CD distillation of Ross’s career to that point. From his first release with The Pink Finks in 1965, to brand new tracks & previously unreleased early recordings, as well as the major hits of Daddy Cool & Mondo Rock, this wide-rangeing compendium is the official ‘history of’, as selected by the man himself. (Go to the “NOW LISTEN!” notes below to read the full liner notes that accompanied this important release.)

2003 – Prepared simultaneously with GoBONGO GoWild! and Now Listen!, but not released til February 2003, a third album, ‘Country & Wilson’, demonstrated the pervasive influence of country & folk music that was hinted at in earlier Ross Wilson works like Come Back Again & Bed Of Nails. Country & Wilson completed Ross’s desire to reveal his fundamental musical sources & uses this genre’s accent on story-telling & finely honed lyrics to deliver his most personal work to date. Produced by Nash Chambers & Ross Wilson 10 of the album’s 12 songs are written or co-written by Ross Wilson. Inspired by his own experiences & beliefs from the humourous ‘(I Was On) MTV In The 80s’, to tales of lost love such as ‘Nothin’s Right Nothin’s Wrong’, the politics of ‘No Soul’, to family history ‘Under The Waves (And Far Away)’, and backed by some of Australia’s finest twangers, on this album you get both kinds of music, Country AND Wilson. Ross Wilson’s second major release for 2003 was The Essential Mondo Rock, a 29 track 2CD Mondo Rock retrospective released by Sony.

2004 – Mondo Rock’s classic Come Said The Boy was sampled for #1 Dance Chart entry ‘The First Time’ by DJ Damon Boyd Vs Mondo Rock, which is included on the freshest Mondo Rock compilation yet, Mondo Rock – The Greatest (Sony/BMG).

2005 marked the 40th year since his first release & Top 40 entry, The Pink Finks’ ‘Louie Louie’. This important landmark was accompanied by celebrations, group reunions, & updated retrospectives. On 27 Feb 2005 Daddy Cool performed for the first time since 1975. The 30 year gap hadn’t changed them a bit which you can see for yourself on ‘The Complete Daddy Cool’ DVD that was released later that year. Mondo Rock also reformed for some Sydney shows (Nov 2005) & have continued to be active.

2007: Daddy Cool capped off the reunion with their first national tour in over 30 years when they hit the road with US legends The Beach Boys. On top of this Ross kept a busy tour schedule of his own with his live action band Ross Wilson & The Urban Legends, including national appearances on the successful ‘A Day On The Green’ series with Chris Isaak and Crosby Stills & Nash.

2008 Mid-2008 saw the release of ‘Tributary’ (Liberation Blue) a semi-acoustic album that revisits songs from his career catalogue resulting in sometimes radical rearrangements of the hits plus fresh airings of worthy lesser known works. Reactions from both critics & fans have been overwhelmingly positive. Late 2008 Ross journeyed to Nashville where producer Mark Moffatt directed sessions for an album full of brand new songs.

2009 These trax were temporarily shelved while he took the ‘5 Decades Of Cool’ concerts to Melbourne & Sydney & released the resulting filmed footage as the debut RW solo DVD ‘Ross Wilson Live At The Palais’ showcasing his long & diverse catalogue with guest performances from members of The Pink Finks, The Party Machine, Daddy Cool, Spectrum, Mondo Rock, Skyhooks & a 3 song duet with national icon Jimmy Barnes.

2010 The release of the Nashville trax is proof that age brings wisdom accompanied by a display of undiminished vocal & songwriting skills. The album’s title is I Come In Peace and the title track’s release as a single accompanied by a hot video, saw Ross back on the airwaves all over the country. 2nd single I Got You was also added to networks in the run-up to Christmas & 2011. Bruce Elder (Sydney Morning Herald) recently stated – “Ross Wilson is unquestionably one of this country’s most gifted songwriters” and I Got You is a “standout rock oriented track”. I Got You, co-written with country music star Dianna Corcoran, celebrates life in modern day Australia “We live in a lucky country / The future is ours to find / And I got you!”

2011 became the year of touring to consolidate the success of I Come In Peace & a 3rd track The Same Moon hit the airwaves. Forays into rural areas included theatre shows in Vic & SA country areas & gold mining boom towns in NSW plus a series of ‘Up Close & Personal’ semi-acoustic intimate performances with the Ross Wilson Trio (RW3). Sony finally released 1971’s biggest album Daddy Who? Daddy Cool for the first time ever on CD in its original form, as a remastered 40th anniversary edition, & it re-entered the ARIA Top 40 albums chart. The classic track from that album, Eagle Rock, has now achieved anthem status for fans of AFL’s West Coast Eagles & NFL’s Manly Sea Eagles resulting in RW appearances for both those teams. Eagle Rock also featured on the soundtrack of Red Dog, the highest grossing Australian-produced movie of 2011. During the past decade RW has become a regular performer at corporate events & conventions & 2011 was his biggest year yet in that arena.

2014 Was the year everything from the past collided with the present:

Rock legend Joe Cocker covered Ross Wilson’s ‘I Come In Peace’ on his platinum selling ‘Fire It Up’ album. (Sadly this was to be his final album as Joe passed away on 22nd of December 2014)