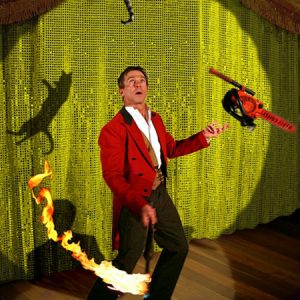 A native of the United States, as a teenager Marty was one of San Francisco’s original and most successful buskers. Winning a street performing competition that brought him to Australia, in the 80s he was an integral part of Australia’s burgeoning comedy scene

Marty’s act is a clever combination of spectacular juggling, fire eating and death defying feats , all wrapped up with nonstop humour. Among his routines are the uproarious apple, bowling ball and egg juggle where he eats the apple during the stunt. There is the “dangerous objects juggle” atop a two metre unicycle where Marty enlists the help of the audience in getting started. And of course he likes to finish on his now famous chainsaw juggle (sans kittens for the stage act!). With or without cats his deftness for combining hilarious patter, visual surpise gags and tension building stunts always keeps the audience on the edge of their seats.

Marty’s comedy act and years of experience as an entertainer lends itself easily to the role of awards dinner compere. From the unique way he commands undivided attention at the start of the proceedings to the sectacular way he can close the show, the audience is always wondering “What is he going to do next?” The answer is always something even bigger and funnier.

Marty first started regularly doing compere work on Open Mike Night at Sydney’s Comedy Store in the mid 80’s. “The challenge was to break his act up so that he could always use his failsafe stunts and routines to reel the crowd back in after an amateur act “died”.”

Possibly the greatest training ground for Marty was where he started out as an entertainer, as a busker in Fisherman’s Wharf, San Francisco. Here, he would not only have to command a crowd’s attention, but organize them into a coherent audience.

If the role of Master of Ceremonies demands:

Just listen to what these people had to say!
“We wanted entertainment and he gave it!”
Ampol Limited
“Everyone who attended our dinner enjoyed Marty’s performance.
Fletchers Fotographics Fletchers Fotographics
“Good sharp humour, easily accessible to all levels of sophistication.
The Intermedia Group The Intermedia Group
“Provided a lot of fun and thrills. The audience involvement was great.”
Sportscene Australia
“He was a great entertainer and comedian; responded very well to the
delegates.”
Travelforce Pty Travelforce Pty Ltd Pty Ltd
“We have received terrific feedback from all of our attendees about the
night, who all expressed their delight about Marty Coffey’s performance.
We would have no hesitation in booking him again for future events.”
Kookaburra Challenge Pty Kookaburra Challenge Pty Ltd Pty Ltd
“I can only highly recommend Marty’s performance. He appealed to the
audience perfectly and had a many standing ovations. Of course, it was
a cocktail party.”
Com Tech Communications
“Best act I’ve seen around here in years. Really livens the place up.”
Circular Quay ticket vendor (1981)