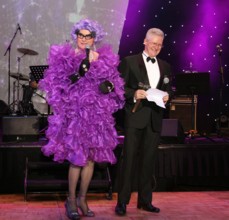 Jason Thompson is a Character Emcee / Roving comedian for themed events both the high-end corporate and private sector.

is also a sought after Master of Ceremonies and Entertainers for both the Private and Corporate sector. His performance generally starts off with meeting and greeting guests as they arrive on the red carpet in one of His many characters (can be done with a video camera and mic on the red carpet too). After the meet and greet He then arrives with a big entrance on stage to Host the themed event by singing a song followed by a welcome and a bit of comedy. Throughout the event he comes down off stage 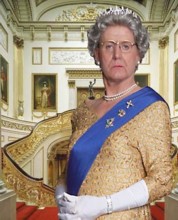 and continues mingling with guests with more roving improvised interactive comedy. Then further Emceeing, announcing other performing acts, CEO’s, special guests etc, and Later (just before the client want guests to dance) He can kick off the dancing with an interactive game show (called “Dancing with the STUFFED” or “STAFF” if corporate) He comes off stage and moves down with a roving mic to pick random guests from the audience to come up on stage (full description of this interactive game is available upon request). If required Jason Thompson can also Emcee out of characters and Host just as himself. Jason Thompson is an established throughout Australia and Asia and now has a green card to live and working in the US to expand my career here. Jason is available to perform nationally. With Jason distinct style full of charm and positive energy, you’ll find He’s funny, warm, friendly and suitable for any occasion.


More Speaker options for your event 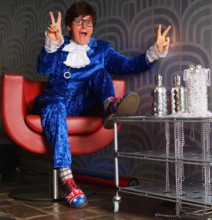