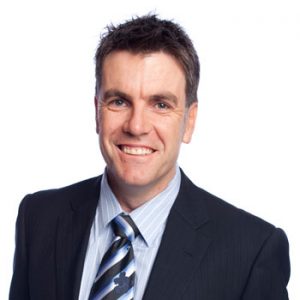 Des Dowling is meticulous, intelligent and very funny, and an asset to any event as both a host and a stand up comedian.

Spending the early years of his career as a news and current affairs reporter for the ABC, Channel 7 and Channel 9, Des decided making people laugh, rather than making them cry, was a far more noble way to earn a living.

In the twelve years since, he’s carved out a career as a top line comedian and corporate entertainer travelling the length and breadth of Australia.

He’s headlined at Australia’s premier comedy clubs and performed his own sold out comedy/sketch show at the Melbourne International Comedy Festival.

Combining his comedic and television skills he worked for two years writing and directing sketches for the hugely successful “AFL Footy Show” and wrote and directed three half hour documentaries for Arena Television’s “Day In The Life” series.

When he’s not behind the camera, Des is in front of it, working as a presenter on Ch 7’s “Coxy’s Big Break” and Ch 9’s “Talk To The Animals”.

But don’t take our word for it. Take a look at the relevant comedy clips, read the testimonials and decide for yourself.

Des Dowling will make your function or comedy night a memorable one.

“Hi Des, fantastic job last night! You definitely made the night a success, so glad I hired you for the gig.”
Carah Lymer – De Bortoli Wines

“Des was a fantastic host at the 2009 REIA National Awards. He was funny, professional, flexible with last minute changes and a pleasure to work with.”
Leanne Medeiros – Tour Hosts