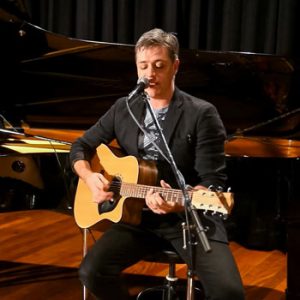 There are few performers who can match Chris for the sheer range of music he can provide and the range of settings he applies to. Quiet jazz, easy listening guitar & vocals, swing-era crooning, rock & pop, all the dance classics; all are featured in Chris’s amazingly diverse repertoire.

In the course of a professional performing career beginning in his mid 20s, Chris has performed – quite literally – all over the world.

Then in early 2013, two major things happened: Chris and his wife moved from Sydney to the Central Coast, and they became parents to the most beautiful girl in the world. Another daughter arrived in late 2014, further cementing Chris’s desire to keep his travels to a minimum. For some years his performing career was mainly centred around singing and playing sax & guitar at weddings, corporate events, private functions and live entertainment at all variety of Central Coast & Sydney live music venues. He also continued to regularly perform his cabaret show around NSW & QLD, and still did the occasional ship contract when the time or itinerary was right.

Now that his daughters are a little older, Chris averages about one cruise a month; more than that his long-suffering wife won’t allow!

As one of the most versatile performers you’re likely to find, Chris is available for corporate shows & private events of any kind. Come see a performance and experience a truly remarkable performer.

All Of Me
Another Day In Paradise
Better Be Home Soon
Change The World
Don’t Know Why
Drift Away
READ MORE...READ LESS