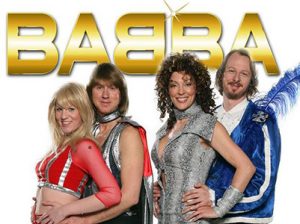 Babba Tribute Show Band is the most exciting and musically accurate tribute to ABBA in the world.

“Dare I say it, as good as Abba” – Molly Meldrum

In a spellbinding performance of all the hits, BABBA tribute show band takes you on a musical journey that will have you on your feet uncontrollably. Since 1994 BABBA tribute show band have performed all over Australia , Asia and New Zealand to sold out audiences and rave reviews. Benny, Bjorn, Agnetha and Frida have returned (with the help of a cryogenic freezer and some cosmetic surgery) to transport you back to the 70s with a show full of humour, great costumes, Swedish accents and fun-filled dance floor action. With spine tingling harmonies and a band that will rock your socks off, BABBA is simply the best night out in town.

Money, Money, Money
The Name Of The Game
Does Your Mother Know?
Take A Chance
Why Did It Have To Be Me?
S.O.S
Mamma Mia
Hasta Manana
Hey Hey Helen Dum, Dum,Diddle

Rock Me Dancing Queen
Tiger
So Long
Kisses Of Fire
I Have A Dream
Happy New Year
My Love My Life
Eagle
Thankyou For The Music
The Winner Takes It All
READ MORE...READ LESS

King Kong Song
Tropical Loveland
Intermezzo No.1.
Nina Pretty Ballarina
II’ve Been Waiting for you
Lay All Your Love On Me
Medley: Super Trouper Summer Night City
Voulez Vouz On And On And On ThatI’s Me

They look like ABBA, they move like ABBA and really importantly they sound like ABBA. Oh and something really spooky! Their names are Agnetha, Benny, Bjorn and Frida! BABBA is a \”must see\”, a \”not to be missed\” experience. I have just spent a couple of hours boogying to the hip and groovy sound of BABBA for the first time and I want more!!
MELBOURNE STAR OBSERVER.
Relive the ABBA experience with BABBA, the brilliant young band fresh from Melbourne, Sweden. (BROTHER SISTER).
BABBA is not just a band or a parody of one, but a complete performance that re-lives the original European sensation. The music is flawless and their onstage interaction entertaining. (AUKLAND TIMES.).
\”With BABBA around we might as well have ABBA on tour. TheyI\’re great!\”
NICHOLAS FALTSKOG PRESIDENT OF THE AUSTRALIAN ABBA FAN CLUB.
\”The highlight of the show was the vocals of Frida and Agnetha. These girls can really sing and BABBA can really play.\”
BEAT MAGAZINE 1995.
\”Take A Chance on BABBA, youI\’ll be living in a dream world.\” I\’AFTER ABBA I\’
(THE AUSTRALIAN ABBA MAGAZINE).
The band have aced it when it comes to getting the music one hundred per cent perfect. Thousands of ABBA fans canI\’t be wrong.
SYDNEY MORNING HERALD
BABBA are brilliant. The Show is entertaining, sincere, professional and great fun. In July they wowed ABBA fans at the 1995 official Australian ABBA convention held in Melbourne. No greater critic than an ABBA fan, more nerve racking is a room full of them – it sure put BABBA to the test. But they passed with flying colours and were greeted with hysteric applause and praise. I\’AFTER ABBAI\’- The Australian ABBA magazine.
Opening music was played at eight oI\’clock and just five minutes later the Glenroy was transported back in time 20-plus years. Bjorn, Benny, Frida and Agnetha with a bass player and drummer, were just as if they had been frozen in time.
The first set saw such classics as Ring Ring, Chiqitita, I Do, I Do, I Do, I Do, I Do and Fernando, all delivered as if the people playing the songs had written them. Babba had the whole package down pat.- Hair, make-up, costumes, the whole nine yards. This combined with practically perfect delivery made for a very fun night.
Bjorn, Benny and Co could and did write some of the most fun party songs ever. Gimme, Gimme, Gimme and Take a Chance On Me had many people dancing, queens or otherwise.
People of all ages had a great night out, especially during S.O.S., So Long and Thankyou For The Music, which rounded off the show.
Only the utmost stomping, clapping and whistling brought Babba back on, delighting the audience with Waterloo and finishing with Dancing Queen, which left everyone happy. I canI\’t help but wonder if there is a school in Australia for Abba tribute bands. If there is, can I join?
(WELLINGTON TOWN HALL REVIEWED BY DARRYL BOER) 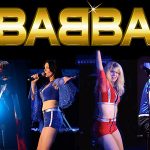 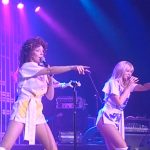 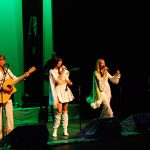 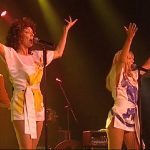 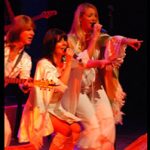 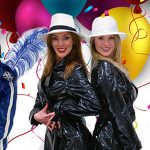 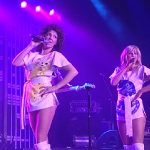