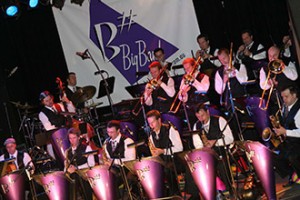 Brought together by the Big Band passion of Henry K in 2003, the emergence of the B# Big Band is being increasingly enjoyed by jazz, swing and dance fans all around Melbourne. B# Big Band are a dance band, a lounge band and a functions band…. A band that guarantees to get toes a-tapping and hearts a-pounding (Hey, not just cos of the music – you should see these guys! – The Webmaster)

“A Big Occasion Deserves A Big Swingin’ Band – The B# Big Band!”

Whether it’s the 7, 10 or premium 17 piece line up, the excitement’s always quick to get pumpin’ and the dance floor jumpin’! Needless to say though, the band’s ‘dinner music’ brackets (when requested), are light, sweet & smooth, allowing guests to easily converse as they mingle. And whether the band’s cruisin’ or pumpin’, B# always hosts the ‘cat’s pajamas’ of vocal talent, including renowned chanteuses: Julie O’Hara, Fiona Thorn, Emma Franz and Hetty Kate, plus smooth crooners: Frank Benedetto, Rod Gilbert and David Dean (aka Dean’s Martini), and ‘floor filling’ super groovers: Eugene Hamilton & Rod Davies.

By the way, David Campbell, Ross Wilson, Tom Burlinson, Bob Downe, Tim Campbell, Monica Trapaga, Mark Holden, Jane Clifton, Joe Camilleri, as well as international stars Wayne Bergeron, Wycliffe Gordon & Lorna Luft have also featured as guest vocalists with B#. And speaking of honoured guests, Australian jazz virtuoso, James Morrison has performed with the band on several occasions, and has had this to say about them:

“At our core, we’ve set our sights on bringing you the music and professionalism of the great swingin’ Big Bands – Basie, Ellington, Goodman, Miller and other Big Cats of the 30s, 40s & 50s. In addition, guest vocalists perform tunes made famous by high profile crooners and chanteuses like Anita O’Day, Ella Fitzgerald, Frank Sinatra, Bobby Darin and Peggy Lee amongst others. These guys & gals are our benchmark because millions of everyday folk know that their infectious tunes are a sure-fire antidote to the trickiness of life!” – Henry K, Founder & Manager, B# Big Band

“No-one ever got depressed listening to Swing music” – Anon

This B# Big Band site will grow with useful & interesting information as the band and the support services evolves No drivel, only the good oil on what’s happening with the band, where and when, as well as responding to your feedback. Due to popular request, we’ll also keep a running tab on who in the band is still single!

So who are the sharpest cats in Melbourne town?