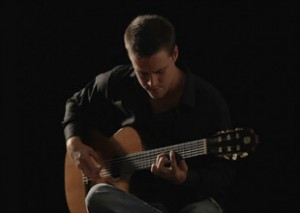 Dan Jackson first picked up a guitar at the age of 7. He was classically trained for nine years, along the way winning multiple local and state titles. It was in his mid-teens that he first picked up an electric guitar, performing originals with a strong influence from Joe Satriani, Jimi Hendrix and Tommy Emmanuel.
However it was the organic nature of the nylon string that drew him back to the acoustic. Flamenco was to become the new obsession, as he travelled to Spain to learn from the masters in the heartland.
Dan has since evolved to incorporate ‘finger-style,’ the visually impressive dual-handed tapping technique that is staking its claim on the mainstream.
Incorporating influence from classical, flamenco and finger-style, Dan’s original works are a fusion of genre. Rasqueado strumming, finger tapping and classical picking give his sound an exciting originality. This unique hybrid of influences ensure a memorable and entertaining performance.
Dan has a nomadic nature that has seen him perform from the streets of Barcelona to the MGM Grand Casino in Las Vegas, and almost everywhere in between.

….. has a performance style lends itself to high-end corporate events, cocktails bars, and ambient music, as well as a self-contained headline performance.